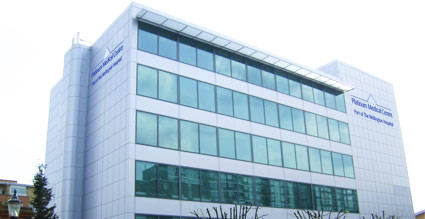 The Wellington Hospital is the largest independent hospital in the UK and has an international reputation in a wide range of medical specialisms including cardiac services, neurosurgery, gynaecology and orthopaedics.  The hospital acquired a nearby office building and Balfour Beatty was commissioned to develop a Design & Build scheme to refurbish the building as a centre for minor operations (not requiring an overnight stay) and outpatient care.   The fire consultant originally brought on board to advise on the scheme had insisted that the fire strategy for the entire seven-storey building should comply with Government HTM (Health Technical Memorandum) guidelines for hospital fire safety.  However, this approach would have increased costs, restricted the design intent and extended the build programme, so, just six weeks before the Design & Build contract was to be agreed, Balfour Beatty called upon FDS Consult’s creative approach to fire design to help deliver the project. The brief from Balfour Beatty was to develop a full concept fire strategy which would gain approval from the fire authorities whilst providing cost certainty and achieving best value.  Strict adherence to HTM guidelines would have required sprinklers on every floor and, in addition to the additional costs of specifying and installing the sprinklers themselves, this would have created a number of additional time and cost issues as there was insufficient space within the building for the water tanks and no dual power supply.  The innovative approach adopted by FDS Consult was to value engineer the fire strategy by:

The three floors where the fire strategy had to take account of the fact that patients may be anaesthetised were the basement and floors 4 and 5.  FDS Consult therefore created compartmentation floors between the basement and ground floor and between floor 3 and floors 4 and 5. This involved the addition of robust fire protection to the existing structure and the specification that any services between these floors should be fire stopped.  FDS Consult also specified an ‘early warning’ fire alarm system, with a fire detector in every fixed enclosure to ensure that action could be taken to contain any fire before it was able to spread. The building’s basement level involved unique challenges thanks to the close proximity of the plant room to patient areas.  While the code called for sprinklers and smoke venting in these areas, FDS Consult used the team’s expertise to justify omission of these features from the specification by:

As with any hospital environment, the evacuation strategy was a major factor in determining the fire design and the experienced team at FDS Consult was able to justify a workable approach to evacuation with minimum modifications to the building.  Thanks to the building’s previous use as offices, there were already sufficient staircases in place to ensure short travel distances and removing any of these would have been of no benefit to the scheme. However, FDS Consult upgraded the lifts in each of the building’s three cores to evacuation lifts, ensuring that a progressive vertical evacuation could be carried out for any patients under anaesthetic or unable to walk. Thanks to FDS Consult’s expertise, not only did the fire strategy achieve approval within the six week deadline but by omitting sprinklers, smoke venting and fire fighting lifts cost savings in excess of £1million were achieved.